The "Blame Game" continues and Karl Rove finds the real villain behind the tragedy of New Orleans in the National Archives -- FRANCE! 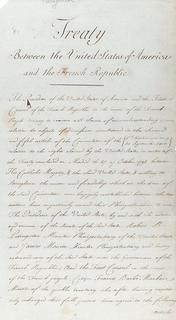 After careful scrutiny by Karl Rove and his staff, it seems that nowhere in this treaty for the Louisiana Purchase did those perfidious French henchmen working for the sneaky Napoléon fully disclose the tendency to flooding and hurricanes in New Orleans and the southern part of the Purchase, nor the tendency to tornados (now to be officially known as "French Twists") and flooding in the northerly reaches of the Mississippi.

The bombing of Paris begins in five minutes. See, the Bush Administration proves once again that there's no problem that can't be solved by a war (or by blaming our intellectual superiors).