As with this weekend's Superbowl, the real message is in the paid commercials.

I'm very rarely home at 6:30 in time to watch one of the network news shows.  When I catch parts of them, I'm usually struck by the overwhelming mix of fluff and drug ads, so I thought I might liveblog any one of them. Tell me if I'm wrong, but CBS, NBC, and ABC seem interchangeable to me at 6:30 EST.  Here we go:


ABC World News With Diane Sawyer on WABC, Channel 7 in New York.
6:30 -- Teasers for Planned Parenthood, Donald Trump, Honda Hybrid, and a possible depression drug story.
First Story -- Diane Sawyer introduces story about Susan G. Komen Foundation  reported by Claire Shipman. The Pink Ribbon Group is withdrawing its financial support from the Republicans' bête noire, Planned Parenthood.  Was the Komen group bowing to pressure from the Right?  No conclusion here.
6:34 - David Muir talks to Donald Trump about his endorsement of Mitt Romney on the Vegas Strip earlier today. ABC does manage to point to some video where The Donald had earlier had some unkind things to say about Mitt. They also note that the multi-millionaire candidate who "likes to fire people" is being endorsed by the billionaire(?) who's tagline is "You're Fired!" 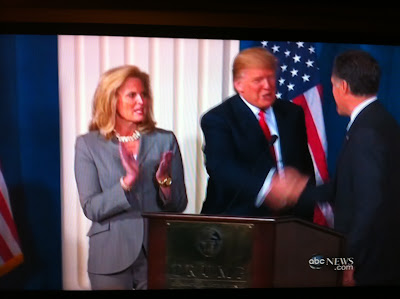 6:37 - A salmonella outbreak at Taco Bell THREE MONTHS AGO was just reported today after an independent investigator discovered that "restaurant chain A" in an FDA/CDC report was the national chain where the chihuahua runs the kitchen.
6:40 -- Nine American states are under winter weather advisories.
6:41 -- Winter weather in Central Europe causing problems.
6:41 -- US combat in Afghanistan could end in 2013 and Martha Raddatz is across the desk in the studio to discuss it with Diane. They also discuss a rumor that Israel may be planning to attack Iran.
6:43 -- Teaser for stories about  Honda Hybrid and a Supermodel supporting her Superbowl quarterback husband.
OVER TEN MINUTES BEFORE THE FIRST GROUP OF COMMERCIALS (this surprises me)
6:43 -- Commercial with karaoke-singing bald man for Geico Insurance
6:44 -- Centrum vitamin commercial
6:44 -- Eat Campbell's Chicken Soup
6:44 -- Chantix commercial. May stop you from smoking (may kill you and do other nasty things says the quick-talking voiceover).
6:45 -- Sad music commercial for Prudential Life Insurance
6::46 -- Back to the News. Heather Peters took Honda to small claims court in California and won in her suit about the mileage she received in her 2006 Civic Hybrid. ABC reports that Edmunds finds real-world fuel mileage tends to be lower for all brands.  (I took this story personally.  I have a hybrid Honda Insight and I get better than the advertised 43mpg -- I've averaged close to 45 over my first 50,000 miles).
6:48 -- Another teaser for an upcoming Supermodel/Superbowl Quarterback story before the second group of commercials.
6:48 -- Blond woman delivers Pro Fracking and Tar Sands drilling propaganda
6:48 -- Tax Act dot com wants you to use their software to fill out your 1040
6:49 -- Fancy Feast Cat Food is truly fancy!
6:49 -- USAA Retirement Planning for military families.
6:50 -- Glucerna Shakes for people with diabetes.
6:50 -- Ameriprise Financial is flogged by Tommy Lee Jones.
6:50 -- Stanley Steemer has a $99 special to clean your carpets!
6:51 -- Back to the News. A short story about people who will become Facebook millionaires when FB goes public, including Bono.
6:51 -- Supermodel Gisele Bundchen sent an email to her friends asking them to pray for her Superbowl husband, New England Patriot Tom Brady. The New York Post responded with a "Not A Prayer" headline.   The story was about as short as the two earlier teasers for it.
6:52 -- Angelo Dundee has died at 90.
6:52 -- Teaser for depression cure story before the third group of commercials.
6:52 -- Allstate Insurance commercial with slacker and old Republican having a fender bender.
6:52 -- Fancy Feast gravy lovers' cat food.
6:53 -- BP propaganda about how well they've cleaned up the coast of the Gulf of Mexico
6:54 -- 5% back with Discover Card
6:54 -- Gout?  It's caused by high uric acid. Check GoutInfo.com so we can sell you drugs.
6:55 -- T. Rowe Price understands our complex global economy.
6:55 -- Good Morning America will add to the Super Bowl hype tomorrow morning
6:55 -- Back to the News and there's a banner about "New Hope" for depression. Dr. Richard Besser talks to a young man, Chris Stephens, who has tried all kinds of depression drugs, but has found results from one dose of Ketamine, Special K.
6:58 -- Thank you for watching. Nightline will be coming later tonight and we'll be back tomorrow.
6:58 -- Credits.
6:58 -- Promo for an upcoming ABC show, The River, premiering soon.
6:58 -- Cadillac CTS can drive backwards as well as forward!
6:59 -- NYQUITS has emotional ad about woman diagnosed with lung cancer delivering the news to her children.
6:59 -- Tickets are available Anything Goes on Broadway
7:00 -- TD Bank time check informs us that it's 7:00.

I was actually very surprised that there were no ads for The Purple Pill or prescription sleep aids or erectile dysfunction drugs, and I was shocked by the fact that there were more than ten minutes without commercials at the beginning of the show.  It wasn't good, but it was better than I expected. However, I won't be trading the PBS NewsHour for ABC/NBC/CBS commercial news anytime soon.
Posted by True Blue Liberal at 2/02/2012 07:48:00 PM