If I were religious, I'd be thinking that my prayers for chaos were being answered. 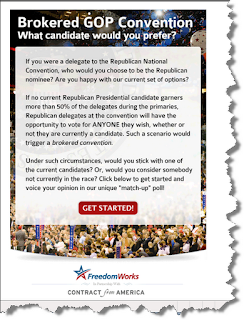 Dick Armey's FreedomWorks, a leading Tea-Party group, sent out an email last night asking for people on their mailing list to express their preferences for candidates like Bobby Jindal and Marco Rubio and Jeb Bush and Mitch Daniels and Christie Christie and Jimmie de Mint if the Republican primary process were to fail to produce agreement on one of the final four and devolve into a brokered GOP Convention situation where the delegates were free to ignore the ignorant primary voters. As Matt Kibbe states in the first paragraph of the email:

As the Presidential race heats up, the GOP Establishment is trying to control the process and tell you that this race is all over with only few states and a miniscule number of delegates already decided. That is simply not true. It is still very likely that no candidate receives a majority of the delegates heading into the Republican National Convention. If this happens and you were a delegate to the convention, you would have the opportunity to support ANYONE, whether they are currently in the race or not.

If you want to add to their chaos, you can vote at http://teapartydelegate.com/. And if you are more religious than me, you can start praying now that this comes to pass in late August in Tampa (Tampa in August? Sounds like hell to me, even without Republicans smelling up the joint).
Posted by True Blue Liberal at 2/10/2012 09:19:00 AM