The Quotation of the Day About Liberals

Lawrence O'Donnell will be talking about this viral quotation on the Rewrite segment of his MSNBC show, "The Last Word" later tonight:

"What did Conservatives do? They opposed them on every one of those things, every one. So when you try to hurl that label at my feet, ‘Liberal,’ as if it were something to be ashamed of, something dirty, something to run away from, it won’t work, because I will pick up that label and I will wear it as a badge of honor."

This could have been posted as my mission statement when I started this blog and John Kerry was pissing me off by running away from the liberal label, and handing the White House (and the meaning of the word) back to George Bush and the conservatives.

So I'll do my small part to spread this virus, as it is appearing around Facebook and blogs: 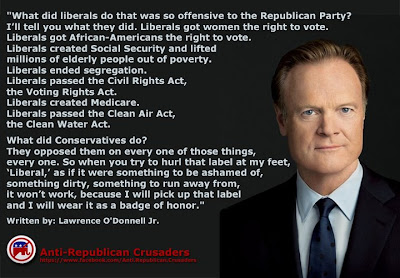 During the Reconstruction era, Republicans ran on a platform which said "now is the Negro's hour," while the Democrats' platform was "this is a white man's country." This is all not true BTW.... If you care - Read here!!!

Anonymous might want to go back and re-read my post. I don't use the words "Democrat" and "Republican"; I use the words "liberal" and "conservative." Otherwise Anonymous (if that is his/her real name) is correct; the Republicans in the 1860s and 1870s were more liberal and progressive than the Democrats of those years.