This Week in the GOP Clown Circus 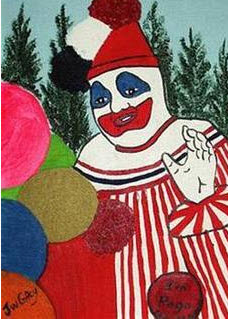 The "GOP Clown Circus" has officially folded its tent and left town.  Calling the remaining travesty a clown circus after Paul Romtorum won Iowa is an insult to its star buffoons, Perry, Bachmann, and Cain.

Here's hoping that Herman's unconventional endorsement will be awarded to Sarah Palin or Donald Trump.  Then the Presidential race would be a full-blown clown circus again, something worthy of a painting by John Wayne Gacy, (Iowa's favorite Hollywood cowboy star).
Posted by True Blue Liberal at 1/04/2012 12:59:00 PM