How Rich Is Willard "Mitt" Romney : The Answer(s) to the TBL Math Puzzler of the Day

This morning I posted the following question on Twitter. "Your Math Puzzler of the Day : If Willard "Mitt" Romney drops a twenty on the sidewalk, is it worth his time to bend over and pick it up?" 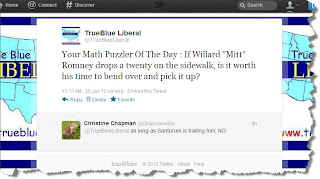 I didn't know the answer myself when I tweeted the question, but I had the feeling that it would be a close call.

Now I've done the math and I have two answers.
It's a silly question anyway. I'm sure he has someone to carry his money for him. He looks like a germophobe to me, and you don't know where that stuff's been.
Posted by True Blue Liberal at 1/25/2012 03:39:00 PM