say the secret word and the duck will drop from the rafters and give you the gop nomination!

Wouldn't it be great to see one of the many upcoming GOP debates hosted by Groucho Marx in You Bet Your Life format? The clowns on stage would finally be treated in the manner they deserve, with wisecracks rather than unearned respect. 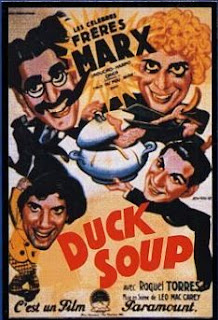 The Marx Brothers came to mind while I was thinking of Herman Cain's videotaped brain freeze last week when asked a simple question about Libya, and the deeper hole he is digging every time he's asked another foreign policy question. I wondered if any interviewer was going to ask him a question about a fictional nation to see if he might simply make things up to avoid another uncomfortable silence. I tweeted a couple of hours ago that I would ask him about the hostilities between Freedonia and Sylvania, the war declared by Groucho's Rufus T. Firefly in the Brothers' 1933 classic, Duck Soup.
Little did I know that Spy magazine already pulled this trick in 1993. The writers asked incoming members of Congress about the ethnic cleansing taking place in Freedonia, and 20 of our new Representatives responded with opinions or expressions of concern about the imaginary atrocities in the imaginary kingdom.
The idea of making people look silly with questions about Firefly's fictional Freedonia wasn't new with Spy either. Thirty years earlier, Candid Camera's Woody Allen asked victims what they thought of Freedonia's bid for independence. I wish I could find a video with which to end this post...
I couldn't find that video, but basic film literacy should require Americans, whether politicians or not, to know the source of the Freedonian references (if only to avoid tricky questions from comedy shows and magazines), so I'll end with this clip from the original source:

The host of Candid Camera was Allen Funt.

I remember Allen Funt vividly, but Woody Allen was also a contributor to the show.