The Biggest Difference Between Liberals and Conservatives in 140 Characters

On this Thanksgiving weekend I was thinking about an uncle who's been gone for a while. He was the first person who gave me my archetype of how a conservative person's mind works. Over a Thanksgiving dinner table, his biggest complaint (before he had kids) was: "Why am I paying school taxes? I don't have any kids!" 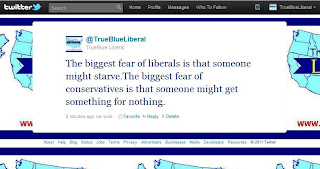 Remembering that statement reminded me of a tweet I made a month or two ago. I think I remembered it word for word and just tweeted it again: "The biggest fear of liberals is that someone might starve.The biggest fear of conservatives is that someone might get something for nothing." It was a spur of the moment statement, and it still feels very true to me. When the first draft of a tweet turns out to be exactly 140 characters long, it also seems to me to have a special quality of 'truthiness.'
But we see the conservative's dislike of paying for other people's needs in more than Uncle X's hatred of paying for the education of other people's children. We see it in the predictable GOP opposition to paying for any health or welfare program, or extension of unemployment benefits, or infrastructure, or investments in mass transit, or green energy, or even giving disaster aid without taking that money out of some other social program.
But there is more than just greed at work. There is resentment of anyone who gets a government "handout" or "free lunch". The resentment is summed up in Ronald Reagan's fictional 1976 caricature of the "welfare queen" that made him a hero among the conservative uncles of this nation:

Of course their resentment of "getting something for nothing" does not extend to resentment of those who get a free ride by being born a Trump or a Rockefeller or a Kennedy or a Bush. That's the only way that money for nothing is acceptable in their world view, and they are doing everything they can to make the passing of wealth between generations easier and tax-free.
But why don't they feel the same resentment about the money that gets poured down the rathole of military waste? Why the cheering of wars and the death penalty and military tribunals and police brutality and almost any other form of state violence? I think they see this violence protecting their property rights, but it's still the part of American conservatism I have the hardest time understanding.
Posted by True Blue Liberal at 11/27/2011 05:59:00 PM