the first Quote of the Day on TrueBlueLiberal.org to contain one of those emoticon things

Jim Carrey tweeted this about ten minutes ago on Twitter, giving us yet another reason to feel good about our decision not to pay a cable or satellite corporation for the privilege of watching other corporations' television programs. 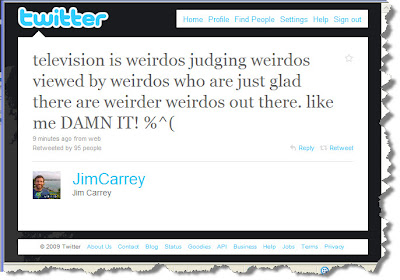 And if you're reading this blog on a device that doesn't show the image up above, Mr. Carrey's tweet reads:

television is weirdos judging weirdos viewed by weirdos who are just glad there are weirder weirdos out there. like me DAMN IT! %^(

Hey all - a shout out from the Big Town, New York. Thought we could somehow make a liaison of some sort. I’m just starting out. My goal is to stay focused on hard issues like transportation, education, environment, etc. New York has a very different set of issues than does much of the country, but the liberal outlook is similar to liberals anywhere. So, take a look, and please get back to me when you have a moment. Thanks, Robert