The Strategy of Distraction


Typical Fox News Viewer's View of #GOPshutdown:"Why did Obama and Reid go out of their way to shut down wheelchair ramps at WWII memorial!?"
— TrueBlue Liberal (@TrueBlueLiberal) October 4, 2013

I received this (surprisingly free of grammatical and orthographical errors) response a moment later:


@TrueBlueLiberal why did Obama #shutdown WWII memorial which was open 24/7 before, but now he closes it? Take your rose colored glasses off
— Truth Teller (@LiberalLies2012) October 4, 2013

I went to this tweeter's page and found the following recent pictures: 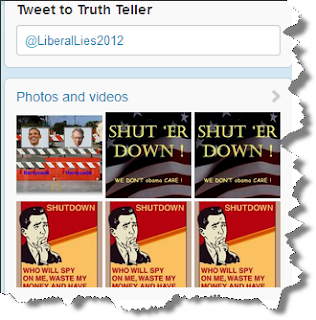 The photo from October 3 shows the "Barrycade" and "Harrycade" representing the closing of the WWII Memorial, but the photos from September 30 say "SHUT 'ER DOWN! WE DON'T obama CARE!" and the other photos from late September show the thoughtful young 1950's white man in a conservative suit wondering "If there is a government shutdown who will spy on me, waste my money, and have contempt for me?"  If these pictures could speak a thousand words (and, of course, they do) they would tell us all about cognitive dissonance and the typical and predictable right-wing media response that focuses on weapons of mass distraction rather than core issues.  It was in full display last March when the only sequestration cut complained about on the right was Obama's Heartless and Personal Shutdown Of White House Tours Just To Punish The Children (THINK OF THE CHILDREN!!!). Now, of course, as one troll pointed out to me earlier this week,  President Obama and the Democrats are Nazis because they hate WWII vets.

It's not just one random twitterer with 29 followers playing up this single-note response to the current shutdown. Michele Bachmann has made multiple grandstanding photo-ops to the Memorial just down the Mall from the Capitol. Rand Paul has managed to combine GOP distractions in one sentence by saying they sent more security guards to the WWII Memorial than to Benghazi. The shutdown's poster boy Rafael Edward "Calgary Ted" Cruz released an official statement about Obamacare causing the Memorial's shutdown. And to prove that this distraction is an official party policy, Chairman of the RNC Reince Preibus (if that is a real name) has offered to have the party pay for five security guards to keep the Memorial open. Is the Republican National Committee willing to pay for scabs to keep all the other departments of the government working as well?

Finally, here's a video of one of the parade of GOP Congressional Grandstanding Photo Opportunists, Robert Randolph "Randy Robby" Neugebauer (R-TX) at the WWII Memorial berating a young Park Ranger for doing her job:

You can tell a lot about a person by the way he treats those he feels are "below" him. Not even the giant American flag in his breast pocket excuses his behavior.

Coming Up Next From the RNC/FOX Media Machine: Blaming Obama and Reid for the earthquake that closed the Washington Monument.
Posted by True Blue Liberal at 10/04/2013 11:01:00 AM