A Glimpse Inside the Right-Wing Echo Chamber

Here are the results as of 9:30 this morning of an extremely unscientific (think Creationism unscientific) NewsMax ("Independent. American.") poll about the current government shutdown engineered by Ted Cruz, the Heritage Foundation, and the Teabagger Caucus in the House. 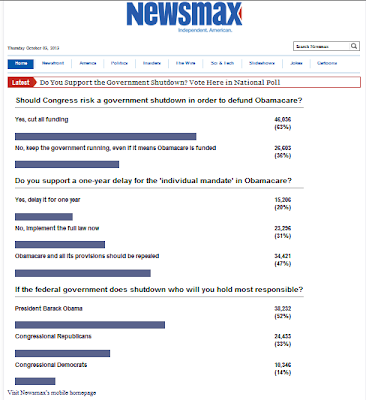 If you have trouble reading the small type in the screen grab, the first question is "Should Congress risk a government shutdown in order to defund Obamacare?" and 63% say "Yes, cut all funding."
The second question is "Do you support a one-year delay for the 'individual mandate' in Obamacare?" and 47% say the ACA should be repealed totally and another 20% say the mandate should be delayed.
Finally, the third question asks the self-selected respondents who they would "hold most responsible" for the shutdown and 52% blame President Obama, 33% the Congressional GOP, and 14% the Congressional Dems.

It may seem silly to even glance at these polls, but these polls are the ones that the Tea Party Caucus is using to confirm their ideas (while ignoring the cognitive dissonance between wanting a shutdown in question one but blaming it on President Obama in question three). This is the "majority against Obamacare" they keep mentioning in their speeches. These are also the polls that had the right-wing universe shocked, SHOCKED, when the Romney Ryan juggernaut didn't win by a landslide last November.