I'm rarely at home on weekdays for Presidential addresses and I'm even more rarely tuned to Fox News to watch those speeches, but I happened to be doing both today when President Obama gave a major speech in Osawatamie, Kansas, that will probably be referred to as his "Teddy Roosevelt Speech". 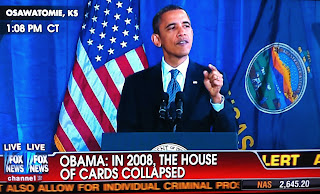 CNN and MSNBC showed the entire speech, but while Fox News showed the first fifteen or twenty minutes of the speech, they cut away to Michele Bachmann's rebuttal less than halfway in, conveniently leaving the speech just as he was getting into the nuts and bolts and dollars and cents of income inequality in the 21st Century USA. Were they afraid that their viewers might start agreeing with the Kansas audience that was responding so positively to the President's remarks?

While viewers of other cable networks received the unfiltered speech, the Fox viewers were hearing Rep. Bachmann calling the President an unpopular class warrior, followed by commercials, Fox attacks on Nancy Pelosi and Jon Corzine, and updates on some crimes of the week.

Here's part of what Fox viewers missed in the President's speech as their network left for more important news and commercials:

So far, most of the Republicans in Washington have refused, under any circumstances, to ask the wealthiest Americans to go the same tax rates they were paying when Bill Clinton was president.


Now, keep in mind, when President Clinton first proposed these tax increases, folks in Congress predicted they would kill jobs and lead to another recession. Instead, our economy created nearly 23 million jobs and we eliminated the deficit. Today, the wealthiest Americans are paying the lowest taxes in over half a century. This isn’t like in the early 50s, when the top tax rate was over 90%, or even the early 80s, when it was about 70%. Under President Clinton, the top rate was only about 39%. Today, thanks to loopholes and shelters, a quarter of all millionaires now pay lower tax rates than millions of middle-class households. Some billionaires have a tax rate as low as 1%. One percent.

This is the height of unfairness. It is wrong that in the United States of America, a teacher or a nurse or a construction worker who earns $50,000 should pay a higher tax rate than somebody pulling in $50 million. It is wrong for Warren Buffett’s secretary to pay a higher tax rate than Warren Buffett. And he agrees with me. So do most Americans - Democrats, Independents, and Republicans. And I know that many of our wealthiest citizens would agree to contribute a little more if it meant reducing the deficit and strengthening the economy that made their success possible.