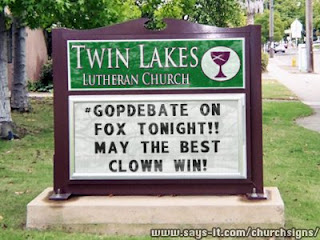 I was TV free during the last GOP Presidential Debate, but I hope to be watching Fox News tonight with the anticipation of a NASCAR fan hoping for a violent track-clearing conflagration (that is why they watch those rolling billboards driving around in circles for hours, isn't it?).

I want to see Willard "Mittens" Romney and James Richard "Rick" Perry coming to physical blows over who stole who's hairdo. I want to see Richard John "Frothy Mix" Santorum and Michele Marie "Crazy Eyes" Amble Bachmann arguing over which of them will create the most inventively medieval method for imposing the death penalty on abortion providers. I want to hear the crowd singing (Beach Boys style) "Bomb Bomb Bomb / Bomb Bomb Iran" when Newton Leroy "Newt" Gingrich rails against President Obama for not "taking out" our stray spy drone or the nuclear facilities Newt imagines in Iran's mosques. With any luck Ronald Ernest "Grandpa" Paul and Jon Meade "John [sic]" Huntsman, Jr. will be the only survivors of tonight's carnage, leading to a long-lasting and endlessly-entertaining clown circus all the way to the Republican convention.

I'll probably be live tweeting over at @TrueBlueLiberal, so if you're on Twitter, I'll see you there at nine using the #GOPDebate hashtag.
Posted by True Blue Liberal at 12/15/2011 03:49:00 PM