Last week I was thrilled to find that one of the key moments of my youth was posted on YouTube. Now here's a video from almost exactly a year later in New York when I was marching again with the same friends from Philadelphia at another large National Peace Action Coalition march and rally.
John Lennon and Yoko Ono came out on the rainy stage set up at the march's end at Bryant Park and led us in the same song, "Give Peace a Chance," that Peter, Paul, and Mary (w/John Denver) had covered in DC on 4/24/71. 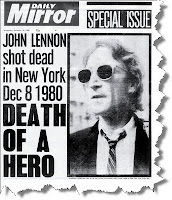 It's hard to believe that this moment happened almost 40 years ago.
Even harder to believe is that in two days we'll be marking the 31st anniversary of the murder of John Lennon a little farther north on Manhattan Island. It just doesn't seem that long ago.
Posted by True Blue Liberal at 12/06/2011 08:27:00 PM

I knew that you were gonna make me cry when I clicked on the link. thanks for proving me right!
Last year Yoko tweeted a John quote that I had never heard. He said :No one has ever really given peace a chance. Dr King tried to, Ghandhi tried to, but they were shot."
The world will never fill the gaps that Lennon, King and Ghandi left.
-landenberg99er