The Right has been very active and organized in using language to focus issues within their frames, but it's encouraging to see a growing recognition of this attempt to control the debates by controlling the language of the debates. Immigration, with the dueling camps being easily identified by their language -- "illegal aliens" vs. "undocumented immigrants" -- is one of our key linguistic battlefields. 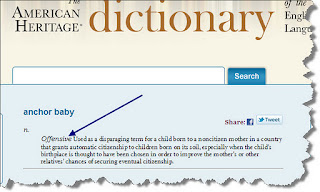 When The American Heritage Dictionary of the English Language recently added a definition for "Anchor Baby" to its new edition, it did so in a neutral way, without pointing out that the so-called "anchor baby" is a concept advanced by the most draconian anti-immigrant groups, those that advocate repealing or otherwise altering the 14th Amendment -- taking away American citizenship from those who were born in the United States to undocumented immigrants. The original definition read:


"anchor baby n. A child born to a noncitizen mother in a country that grants automatic citizenship to children born on its soil, especially such a child born to parents seeking to secure eventual citizenship for themselves and often other members of their family."

This neutral definition of a politically-loaded term by the Dictionary was noted by the American Immigration Council on December 2.  After being pointed out to the Dictionary, they have altered the definition (with key changes underlined here):


"anchor baby n. Offensive. Used as a disparaging term for a child born to a noncitizen mother in a country that grants automatic citizenship to children born on its soil, especially when the child's birthplace is thought to have been chosen in order to improve the mother's or other relatives' chances of securing eventual citizenship."

It pays to pay attention to the language being used by activists on the Right and the media (and lexicographers) who sometimes blindly or lazily follow them.
Posted by True Blue Liberal at 12/06/2011 01:19:00 PM