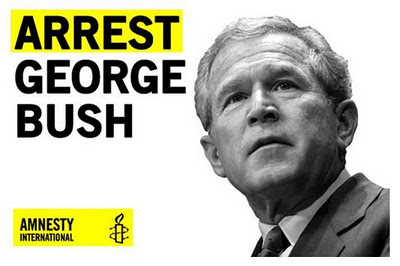 The Canadian government probably doesn't have any more will to arrest America's most prominent war criminal than an Obama administration whose main concern is proving their bipartisanship (and continuing Bush's wars "with honor"), but the fact remains that both Amnesty International and Human Rights Watch have officially warned our neighbor to the north that a torturer and war criminal is on his way to Surrey, British Columbia tomorrow and should be arrested.
If you're on Twitter or other Social Notworking sites, please send your support for Bush's arrest.
Posted by True Blue Liberal at 10/19/2011 08:36:00 PM