All the Way With BHO?

As we get further and further in time from the Presidency of Lyndon Baines Johnson, the parts of his legacy that stand out seem more and more impressive: Medicare, Medicaid, the Voting Rights Acts of 1964, 1965, & 1968, the Public Broadcasting Act of 1967, the Department of Transportation, Head Start, the Higher Education Act of 1965, Bilingual Education Act of 1968, the Motor Vehicle Safety Act of 1968 inspired by Ralph Nader, the Endangered Species Act of 1966, the National Endowment for the Arts, the National Endowment for the Humanities, and more. The list of programs falling under the umbrella of The Great Society read like a Teapublican's wish list of the main elements of America's 20th-Century liberal legacy that they are working so hard to roll back.

But I remember 1968, and Lyndon Baines Johnson for me was a symbol of everything that was old and illiberal and out of touch, bordering on evil. It was because of one issue that overshadowed EVERYTHING that he did on the domestic front: Vietnam. LBJ didn't start the war and he had wide bipartisan support for the Gulf of Tonkin Resolution in 1964 (416-0 in the House and only Morse and Gruening voting no in the Senate) that gave the green light for his escalations (think "Surges" in 21st-Century Newspeak), but it didn't take long for that police action in Southeast Asia to tear the country, and the Democratic Party, in half. 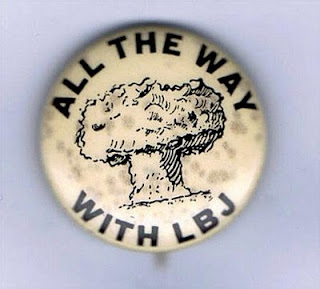 There are major differences between LBJ and BHO, beyond the fact that the Obama's Affordable Health Care Act doesn't hold a candle to the domestic achievments of Johnson. First of all, the wars of Afghanistan and Iraq will always be Bush's wars and the crimes of waterboarding and Abu Ghraib will always belong to the previous regime. But the biggest change between the war of my youth and these endless wars of the 21st century is the lack of a draft. If the privileged children of the suburbs planning on peaceful futures saw those futures usurped by their birthday drawing a low number in a draft lottery, then there would have been millions of young people in the street against these endless wars no matter who was living in the White House. There are some rumblings of direct action against the current corporate-controlled power structure which supports the current wars and leans from center-right Democrats to lunatic Teapublican fringe, but "Occupy Wall Street" is never going to motivate millions to hit the streets the way the Moratoriums and other mass marches against the Vietnam War.

He has almost closed down the illegal war on Iraq, but with Barack Obama's failure to close Guantanamo Bay, his willingness to impose the death penalty by remote control on American cititzens this week, his surge in Afghanistan, and his acceptance of the Patriot Act and other assumptions of the so-called "War on Terror", it may not be too long before responsibility for these awful foreign policies starts sticking to his administration. And until the military stops draining our national treasure, he won't have the resources to accomplish even one hundredth of what LBJ did domestically during his brief time in the White House.