Where was the fire?

Governor Jon Corzine's piece-of-shit full-size SUV was traveling at 91 mph on a 65-mph highway before his crash last Thursday according to the Superintendent of the New Jersey State Police today. It also seems to have been scaring other hard-to-control trucks out of their lanes with its hectic approach. At least this "accident" didn't claim any innocent victims. 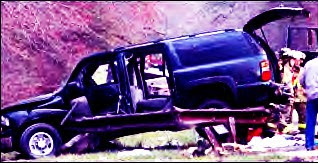 Is anyone else pissed about this? I voted for Jon Corzine and I probably will again, but I also drive on the Garden State Parkway in a Volkswagen, and I have a son with a fresh driver's license. What am I supposed to say to him about speeding when the New Jersey State Police not only do NOTHING to stop an average speed of 75-85 mph on a crowded 65-mph highway, but they treat this busy highway as their own personal racetrack. It's bad enough when they do it in their cruisers, but these top-heavy oversized trucks are potential murder weapons when driven at that speed.
I have this naive belief that nobody is important enough to speed unless they're responding to an emergency. The Governor of New Jersey is not a fireman, and he was not on his way to the scene of a crime. I know that most people in his position probably do it routinely, but I think they need to explain why (though the obvious answer, I'm afraid, is "because I can").

New drivers are also told that they are responsible for making sure that their passengers are belted. Why didn't this State Trooper/Chauffeur insist that his front seat passenger wear his seatbelt?

"...the trooper driving the vehicle, Robert J. Rasinski, had told investigators that he did not know how fast he was traveling as he led Mr. Corzine’s two-car caravan, emergency lights flashing, from an Atlantic City speech to a meeting at the governor’s mansion in Princeton."

Funny, but "I don't know how fast I was driving" is never an acceptable answer for a civilian to give a trooper.
The article is also very good on describing how the official SUV caused the crash, and also how it was breaking the rules of engagement for non-emergency government vehicles.
Posted by True Blue Liberal at 4/17/2007 09:05:00 PM