This Is No Longer About "Don Imus", It's About the Racism of CBS and NBC

When Don Imus said to Al Sharpton this afternoon, "I can't get anyplace with you people," it became more obvious than ever that he lives in a world that is sharply divided between black and white. "You people" can only be taken one way. The other key statement from his interview with Reverend Sharpton is that he has no intention of resigning. It's also clear, after 40 years in the business, that he's not changing his stripes. He is who he is, and he's not leaving on his own.

The FCC (according to reports on CBS News tonight) will take no action because no nipples or f-words were involved.

So, with neither resignation nor government action imminent, the ball is now totally in the court of CBS (owner of his radio outlet) and NBC (owner of his television simulcaster). They either need to pull the plug on his microphone, or they are officially condoning racist slurs and the ability of old men to comment on the appearance and sexual habits of very young women.

This evening MSNBC administered its first wrist slap, but a two-week hiatus in the simulcast cannot be considered a punishment

And by the way, "You People" does not just include the "You People" of whom Al Sharpton is a member. There is also the sexist component of the term "nappy-headed hos" that has millions of women understandably upset. Here is an easy to follow campaign organized by the National Organization for Women that will help you send letters to the appropriate people at CBS and NBC.

Where are the high profile CBS and NBC personalities? Are they working behind the scenes to cleanse the racism from their organization? Do any of them have the guts to actually speak out about this stain on the network that feeds them? THAT probably would lead to a firing. This is America in 2007, where you can say anything you want about people younger and darker and weaker than you, but leave your bosses alone.

Where are the high profile professional athletes? How quickly would WFAN-AM in New York drop Imus if Derek Jeter and Eli Manning and David Wright refused to interact with that sports radio station until the I-man was gone? I'm pleased to see that Cal Ripken is the first guest to cancel a scheduled Imus appearance, so maybe that wall is breaking too, but it is amazing to see, over and over again, how people get more cowardly when they have more to lose. 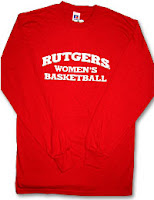 If the NBCBS overlords don't drop him soon the Rutgers football Scarlet-White Game on April 21 will become the "April 21 Anti-Imus Rutgers Stadium Rally."

I'm personally not ready to accept Mr. Imus' apology because frankly I couldn't tell if it was motivated by a sincere feeling for the hurt he caused, or because he was hurting about the possibility of being fired.

The issue is both as large as the concept of civil discussion and the role of the media in social commentary, and as small as the sinking feeling I have personally as one who thought I would be going home from Cleveland ready for questions about "How was the trip?" and "How did the kids manage to get their season turned around and make such a fantastic run in the tournament?"

Needless to say, instead of answering those questions, I had to share my disbelief, disappointment, and anger about Mr. Imus' utterly indefensible commentary. Talk about a downer.

Mrs. Stringer's contract is due for re-negotiation this year, and here's hoping that her experience and her remarkable season weren't "trashed" by Mr. Imus' remarks, and that she'll feel as though she's supported by the administration. (The message from the RU president was very kind and very supportive.) I also sincerely hope she doesn't feel that Mr. Imus and others of his ilk will continue to make her program the target for so-called jokes.

Dear RU Fan,
Wow. I'm jealous that you got to go to Cleveland and see the Rutgers women play in person on the big stage. I can't imagine what it was like for the players and for Mrs. Stringer to be brought back to earth so abruptly by Imus and his henchmen, but it's bad for the fans, and the University as a whole too.
I made the trip to Houston to see the Knights win the Texas Bowl. That was a high that lasted for awhile, but it would have turned to anger if Don Imus had commented in racist terms on the appearance of Ray Rice and Ramel Meekins and Quintero Frierson the next day.