This Picture Should Destroy a Few Stereotypes . . . 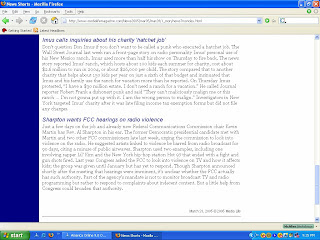 ... and destroying stereotypes seems to have become the raison d'être of this blog all of a sudden.

There's a real danger that with the entry of Al Sharpton into the debate about Don Imus's right to use the public airwaves to call young women of Rutgers by hateful sexist and racist names, Imus's defenders will now try to turn this into the Don vs. Al Show, a show that goes back at least a decade. So I looked for instances where these men have interacted in the past. Along with the expected finds about Rev. Sharpton's voice being imitated on the show in an Amos'n'Andy show manner, I found the following coincidental juxtaposition of articles in a Media Life Magazine news page from March 28, 2005. It was worth a screen capture; just click the picture to enlarge to full screen or click here to see it in its original setting (just scroll to the bottom).
I hope that this issue -- this important debate about the acceptability of casual racism and sexism on the air -- doesn't boil down to the Don vs. Al Show, but if it does, I'm 100% on Rev. Sharpton's side!

IMUS IS A HYPOCRITE...

He has made on air comments about people for years...

His comments about Dick Cheney were never called to task...

However, let him DARE to make a racist comment...then OFF WITH HIS HEAD...

He deserves the SAME fate as TRENT LOTT....

Now, folks, do your homework.

If you google the Imus Kids with Cancer Ranch...look at the financials. Imus was under investigation by the NY AG, Mr. Spitzer...then, Miracously, when he came out and campaigned (on the air) for Mr. Spitzer...why they found NO wrong doing.

The Imus Ranch spends 30 (that's THIRTY with a capital T) more per child than other similar camps.

Could it be that all the lush trappings are benefitting Don and Diedra and little Wyatt (the child who the I-man thinks it is cute when he says FY)?

OK, Maybe all those years of substance abuse has taken it't toll on his gray matter.

He is sometimes witty and I often (formerly) used to listen to him. Now, he reminds me of a Liberal Rush Limbaugh...

The National Organization for Women has an online e-mail campaign going. http://www.capwiz.com/now/issues/alert/?alertid=9602971&type=CU

CNN is also running a poll asking if Imus' apology was enough to make the controversy go away -- unfortunately at the moment the bigots are winning.

Dear Desert Beacon, Thanks for the NOW letter link. I sent it to some friends.

Just another reason to believe the Rev. Al was right on when he said:

"White folks was in caves while we was building empires... We taught philosophy and astrology and mathematics before Socrates and them Greek homos ever got around to it." -- Rev. Al Sharpton in a 1994 speech at Kean College, NJ

White is not right.

I signed onto an affiliate station to launch a complaint on imus...I got a system generated response which served as a receipt...lets see if the customer rep. will attemp to discuss my message. If anyone is interested I clicked on www.westwoodone.com and clicked on contact us at the bottom of the screen.