MSNBC does the right thing (for the obvious reason); all pressure now shifts to CBS 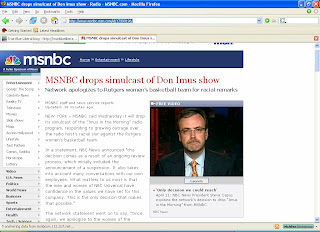 ALL ABOUT THE MONEY

It may turn out to seem like a Pyrrhic victory when some right-wing pressure group leans on sponsors to get rid of something we like on the radio (though we only listen to NPR, which doesn't have sponsors), but for now it's just a victory. It was for the money (or fear of losing it) that major American corporations, afraid of being tarred as sponsors of racism, caused another major American corporation, NBC Universal (a subsidiary of General Electric), to pull the plug on the cameras this evening.

It would have been nice if NBC has made the decision immediately, a week ago, for less mercenary reasons, but it still feels good to know that this insult against the Scarlet Knights, women, and African Americans, has finally been appropriately addressed. The online announcement included the key lines here:

The network’s decision came after a growing list of sponsors — including American Express Co., Staples Inc., Procter & Gamble Co., and General Motors Corp. — said they were pulling ads from Imus’ show for the indefinite future.

But it did not end calls for Imus to be fired from the radio portion of his program. The show originates from WFAN-AM in New York City and is syndicated nationally by Westwood One, both of which are managed by CBS Corp. For its part, CBS has not announced plans to discontinue the show.

If the sponsors don't get to WFAN to pull the plug on his microphone, then the pressure has to be put on athletes to follow Cal Ripken's example and refuse to deal with Imus or his sports-talk station. I don't think it will take even that much though. CBS will not want to look more racist than NBC. It's as simple as that, or it should be.

Later in the MSNBC announcement was this bit about Barack Obama's statement today on Imus and the young women of Rutgers:

Before the announcement was made, Sen. Barack Obama (D-Ill.) had appeared on the MSNBC program "Hardball," where host David Gregory asked the senator and presidential candidate if he thought Imus should be fired.

"I don't think MSNBC should be carrying the kinds of hateful remarks that Imus uttered the other day," Obama said.

He went on to note that he and his wife have "two daughters who are African-American, gorgeous, tall, and I hope, at some point, are interested enough in sports that they get athletic scholarships. ... I don't want them to be getting a bunch of information that, somehow, they're less than anybody else. And I don't think MSNBC should want to promote that kind of language."

Obama went on to say that he would not be a guest on Imus' show in the future.

So, based on the statement I made in my last entry, both Obama and Clinton gained a point today in my early calculations to see who I'm voting for in the New Jersey primary next year.

Thanks for your coverage of this issue. It's much appreciated. My comments this morning are too long so I put them on the DB blog: http://desertbeacon.blogspot.com/2007/04/imus-and-white-whine.html