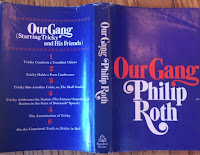 The first of many Philip Roth novels I have read was 1971's Our Gang (Starring  Tricky and His Friends), which appeared when I was in high school in the Nixon years.

In advance of the text of his 200-page satire about Trick E. Dixon, Roth chose these two epigraphs to appear:

"...And I remember in frequent Discourses with my Master concerning the Nature of Manhood, in other Parts of the World; having Occasion to talk of Lying, and false Representation, it was with much Difficulty that he comprehended what I meant; although he had otherwise a most acute Judgment. For he argued thus; That the Use of Speech was to make us understand one another, and to receive Information of Facts; now if anyone said the Thing which was not, these Ends were defeated; because I cannot properly be said to understand him; and I am so far from receiving Information, that he leaves me worse than in Ignorance, for I am led to believe a Thing Black when it is White, and Short when it is Long. And these were all the Notions he had concerning that Faculty of Lying, so perfectly well understood, and so perfectly practised, among human Creatures." -- Jonathan Swift, A Voyage to the Houyhnhnms, 1726

"...one ought to recognize that the present political chaos is connected with the decay of language, and that one can probably bring about some improvement by starting at the verbal end … Political language – and with variations this is true of all political parties, from Conservatives to Anarchists – is designed to make lies sound truthful and murder respectable, and to give an appearance of solidity to pure wind."  -- George Orwell, "Politics and the English Language," 1946

Lying and the degradation of political language weren't new in 2016, or when Roth wrote about them in 1971, or when Orwell wrote about them in the 1940s, or to Swift in the the 18th Century, but that doesn't mean we should stop trying to fight against them by pointing out examples whenever and wherever they appear.