This morning @DonaldJTrumpJr felt it necessary to retweet @FoxAndFriends' tweet about Fox News' dumbest anchor and Trump friend @SeanHannity interviewing Julian Assange about how (contrary to what the CIA and everyone else in the world seems to believe) Russia had nothing to do with the DNC documents provided to Wikileaks. 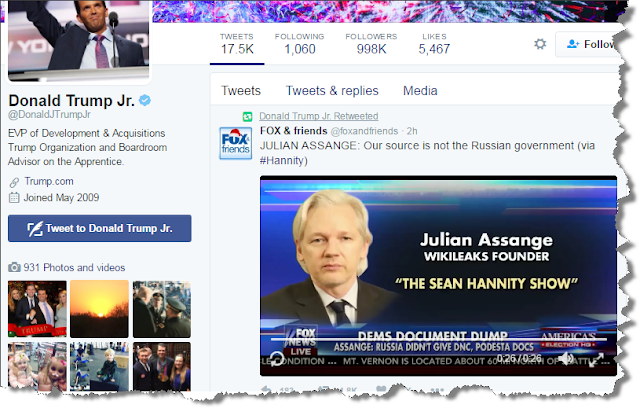 Sometimes it's helpful to get a quick peek into the completely counterfactual media bubble within which Donald Junior's father has comfortably cushioned himself. Donald Senior is not someone who seems to have a desire to dig too deeply for information on his own (or accept any information that might contradict what he already 'knows'), so this glimpse into his son's Twitter feed is like a glimpse into the President Elect's brain. Maybe he actually doesn't know, or have the ability to believe, the role the Russians played in tipping the election in his favor.