Who is going to factcheck Google on Trump's vital statistics?

I have to preface this by saying that I'm 6'3" and I've weighed between 175 and 220 over the last forty years, so I have some idea what 198 pounds should look like on Donald Trump's frame. There is no way that he weighs 198 unless his belly, butt, and double chins are all filled with helium. 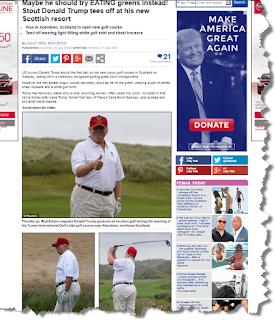 I've never had the appropriate job experience judging the weights of strangers at a booth in a county fair, but my partially-educated guess is that he weighs about 240. Anyone else have a guess they want to leave in the comments?


The American press doesn't really treat Donald Trump  in the way he deserves. He needs to be treated the way the Daily Mail did when they greeted the appearance of the junk-food-eating tycoon at his golf resort in Scotland with an illustrated article in 2012: "Maybe he should try EATING greens instead! Stout Donald Trump tees off at his new Scottish resort."
Posted by True Blue Liberal at 8/11/2016 09:33:00 AM