[Almost] Back to Business As Usual in the GOP/Fox Universe

After yesterday's Twitter misstep by the current resident of the White House, he was attacked from both sides of the aisle for reverting to his true bullying misogynistic personality (with a healthy dollop of his professionally-unexamined female blood obsession). Among the Republicans who attacked the anti-Mika Brzezinski tweets was Ben Sasse of Nebraska who responded, "Please just stop. This isn't normal and it's beneath the dignity of your office."

This morning Senator Sasse was on Donald Trump's favorite show Fox and Friends and called for a change in strategy to repeal the Patient Protection and Affordable Care Act: 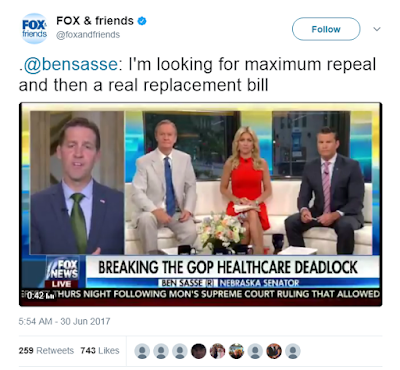 A few minutes later, the president (whose own understanding of the mechanics of drafting and passing laws is less than rudimentary) tweeted this: 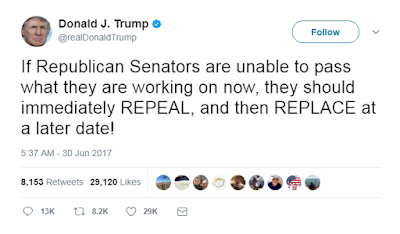 Looking at the time stamps on those tweets, it looks as though the official presidential statement in tweet form might have come before the Fox broadcast, but a CNN reporter retweeted by Sasse confirms the original sequence:

The sequence, however, is actually immaterial. The real point is that the GOP White House, the GOP Senate, and the GOP television network are all getting back on the same page and are rededicating themselves to working hard to achieve job one, removing health insurance from the poor and middle class in order to give large tax cuts to the very rich. Hooray! The world is back to normal!

HOLD THE PRESSES! While I was writing this, it seems that a certain television addict in the White House switched the channel from Fox News to MSNBC, and got his tweeting back on track.

Trump Tweet Translator:
"#PresidentBannon needs to give me more things to do. It's not good for me to have too much time to watch TV. Sad." https://t.co/np3XL8Wlt0
— True Blue Liberal (@TrueBlueLiberal) June 30, 2017