A 'Total and Complete Vindication!' Poll

While yesterday's James Comey Senate testimony branding the current occupant of the White House a liar was seen by most as a bad day for Donald Trump, at least one person on Twitter took a contrarian view when he awoke at five this morning ... after almost two full days of social-media silence. 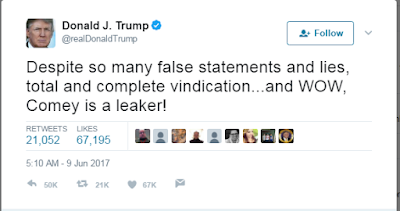 Which leads to this morning's @TrueBlueLiberal Twitter Poll question:

POLL: Which of these is the most likely primary source of @realDonaldTrump's "Total and Complete Vindication" tweet this morning?
— True Blue Liberal (@TrueBlueLiberal) June 9, 2017