Have a man and a noun ever been as perfectly matched as Donald J. Trump and vulgarian? 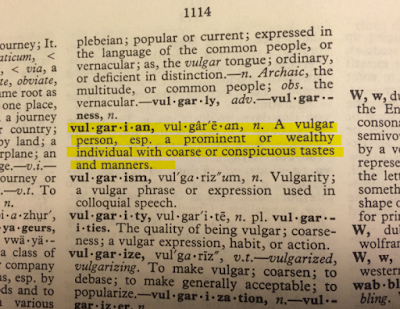 "A vulgar person, especially a prominent or wealthy individual with coarse or conspicuous tastes and manners."? Bingo.

Graydon Carter improved on The Donald's nickname in the pages of Spy magazine by giving him immortality as the short-fingered vulgarian in that short-lived monthly's pages. In last night's GOP debate on Fox News, the thin-skinned Trump once again erupted over the issue of his tiny hands and stubby digits (and what that might have to do with the size of his penis).


"He [Rubio] hit my hands. Nobody has ever hit my hands; I've never heard of this one. Look at those hands. Are they small hands? And he referred to my hands, 'If they're small, something else must be small.' I guarantee you, there's no problem. I guarantee." -- Donald J. Trump, 3 March 2016

He never heard any remarks about his short fingers before? That may be the biggest of his many lies. Marco Rubio referred to his hands because he knows what a sensitive area this has always been for Trump since a young age, when his little sausage fingers prevented him from reaching his true goal as a concert pianist.

To get back to the word of the day however, even if we hand Donald Trump the possibility that his fingers may be nearly normal size, there's no denying that he is the perfect illustration of a vulgarian.