The Trumpism of the Day

The quote of the day from the improbable GOP frontrunner came during an interview on MSNBC's "Morning Joe" program yesterday. When asked to name his foreign policy advisors, Trump answered:


“I’m speaking with myself, number one, because I have a very good brain and I’ve said a lot of things."

Hearing that, one can't help but wonder where that very good brain gets its data. Unfortunately, I think we already know. As with the people who support him, he admitted on CNN back on August 19th that he learns much of what he knows about the world from watching TV (which, until his highly-publicized romantic breakup with Megyn Kelly, meant an almost exclusive diet of Fox News' paranoid world view): 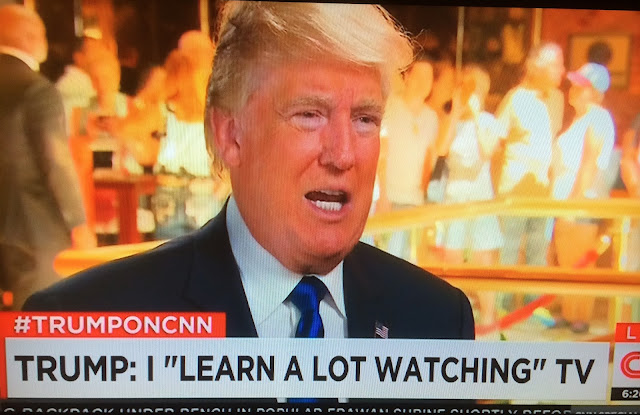 Finding this screen grab from last summer made me realize that we can all learn a lot from watching television; Mr. Trump seems to have gained some weight on the campaign trail. Hasn't he learned yet that all seasoned politicians are experienced bulimics who vomit out their endless trail of obligatory campaign meals and required ethnic snacks?

~~~~~~~~~~~~
Update at 3:30pm EDT
The foreign-policy-expert/candidate now also gets bonus bogus information from unverified internet postings as well as his television!