A Modest Proposal for the Next Presidential Debate.

Despite the predictable Fine White Whine about liberal media bias from Reince Priebus and Ted Cruz and others, the real problem with the debate questions, whether on CNBC or CNN or Fox, is the lack of follow-up questions when questions are evaded or the answers are obviously lies. Even conservative commentator David Brooks pointed this out on PBS NewsHour on Friday:


"I think the questioners were not prepared for the brazenness of the lies. [...] there was a certain brazenness to it. And that’s been true of this year, that you — somehow, there is no political price."

So here's my proposal. If the network questioners can't keep up and do the research on the lies and follow up in real time, or are scared that they will be accused of being (gasp!) "Liberal" if they do so, the least we can ask for is instant on-screen commentary from Politifact.com or FactCheck.org: 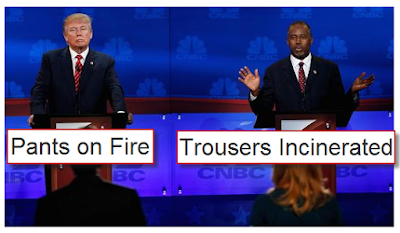