Don't Wait Until 2016 to Check Your Voting Status 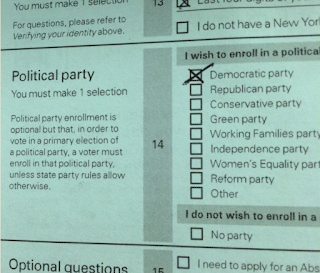 The last time I voted in a primary that mattered was 2008 when I was living in New Jersey and did not need to enroll in a party to vote for Barack Obama. However, since moving to New York and registering as "No Party" in 2010, I have not been able to vote in a New York primary election. That didn't matter in 2012, but when Vermont's independent Senator Bernie Sanders announced his candidacy for the Democratic nomination, I decided it was time for me to make the same change. I went to the New York State Board of Elections website to get the proper form to convert my independence into Democratic Party membership, and on May 26th I mailed the form to my county board of elections.

Yesterday, June 4th, I got home to find the following letter in the box at the end of my driveway. 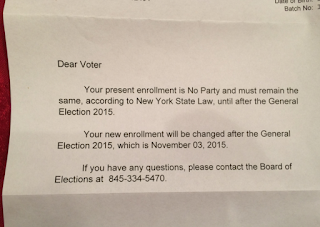 So, if you are a potential Bernie Sanders supporter in New York or another state like New York with closed primaries and rules written to favor official party candidates, then please check your voting status as soon as possible.