1992 was another year in which the candidate I supported in the primaries lost. (The background music for the writing about this year is R.E.M.'s Out Of Time.) The Jerry Brown and Bill Clinton clashes, some of which involved Hillary's law firm weren't the only similarity with 2016. Jerry Brown was also a precursor of Bernie Sanders in his attack on PACs, his $100 cap on contributions solicited from small donors with his ubiquitous 800 number, and a no-frills campaign in which he stayed in supporters' houses rather than fancy hotels (cf. the photos of Bernie flying coach and carrying his own bags). Since his first round as California Governor, I always liked Jerry Brown's style that was totally out of sync with conventional politics and conventional American lifetyles. I wasn't a fan of Bill or his centrist path, and I was disappointed when he got the nomination, but I voted for him. I didn't see it as a case of  "the lesser of two evils." It was more a case  of "the leftest of two centrists," and note that's 'leftest' as in 'most left'; there were no leftists involved on either side. George H.W. Bush had lost my vote for good when he gained the support of 90% of Americans with Operation Desert Storm.

1992 is also the rare classic case of the third party helping rather than hurting the Democrats. Ross Perot got almost 20 million votes and Bush only lost to Clinton by about 5 million. If some of those Republicans had voted for "rightest of two centrists" rather than the shiny little nut from Texas, George the First would have easily won re-election.

I voted for Clinton/Gore over Dole/Kemp in 1996, but I don't remember much more about it than that. I remember having one Clinton/Gore pin similar to the one pictured here, but I haven't stumbled on it or anything else from that year. (This entry will be too short to require a change in soundtrack on my turntable, but if I did pick something to represent 1996 for me, it would probably be Blur's The Great Escape).

It might be worth mentioning that Ross Perot ran again in '96 and got 8 million votes, enough to swing it as he could have in 1992 if his voters had gone Republican. Also, the Green Party's candidate in '96 was Ralph Nader, who came in fourth with 685,297 votes. 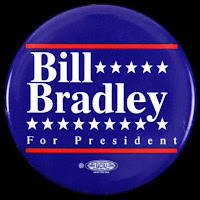 This is the year we'll hear about most in 2016 if it seems as though a significant number of hardcore BernieOrBusters will be voting for the Green Party's Jill Stein or the Libertarian Gary Johnson. (My soundtrack for 2000 is, of course, Kid A.) Early in the primary season, I thought I'd be voting for New Jersey's Senator Bill Bradley over Al Gore, but by the time the New Jersey primary came around Gore was unopposed and I didn't even vote in the meaningless preliminary round.

I had no problem voting for Gore over Nader and Bush in the general election, but others did. Nader got just under 3 million votes nationwide, but - most importantly - he picked up 97,488 votes in Florida, which Gore only lost by 537 votes (though even that thin Bush margin needed an assist from a Republican Supreme Court). If a miniscule percentage of those 97,488 who felt their votes didn't count except to "send a message" had voted for the major party candidate closest to their views, George W. Bush would not have been able to gain the White House (even with help from the Supremes).

Adding insult to injury, of course, is the fact that Al Gore won the popular vote by over 450,000 votes nationwide.

Try to imagine a situation in 2016 where Donald Trump loses a key state by less than a thousand votes, or loses the electoral vote after winning the popular vote. Will he, a conspiracy theorist who already claims the system is rigged and fixed, go quietly? Will his supporters, more conspiracists and heavily-armed white supremacists and motorcycle gangsters, go quietly? Do we want to find out? It's important that Donald Trump be crushed decisively in November, and not only to show the rest of the world that he only represents a fringe of America. Ralph Nader in 2000 is still the best lesson we have for why it's sometimes necessary to choose the lesser of two evils rather than send a message that no one hears (unless it blows up the side you're closest to).