A little over a week ago, the world celebrated the 400th anniversary of Shakespeare's death (and 452nd anniversary of his traditional birthday) on April 23.


This morning I found myself on the train reading this from Bill Bryson's short Shakespeare: The World as Stage (2007): 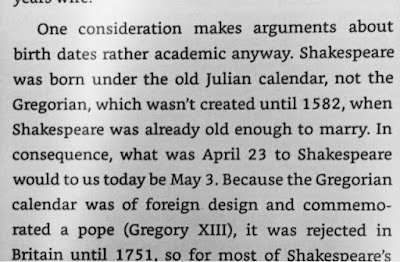 There's no reason we can't continue to celebrate the traditional Julian date of April 23, but according to our current Gregorian calendar today is Shakespeare's real double birth/death anniversary, so what the fuck am I doing at work on what should be a major holiday throughout the English-speaking world?