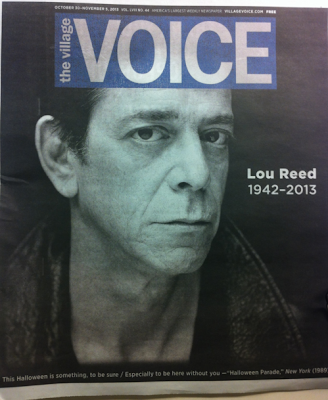 The topic of this post is "old news" of course in the era of Blogger, Facebook, and Twitter, but out at lunch today I passed a plastic red The Village Voice box and saw Lou Reed's face staring out at me on that old medium, ink on paper. I used to subscribe to the Voice back in the Seventies when it was much more "content heavy" (to use an awful 21st century concept) and there was compelling writing and art in it every week. Now I rarely pick it up for free, but this week's is an exception, so grab the Oct 30-Nov 5 issue if it's still available around you.  It's filled with reviews from the Voice archives of Lou's concerts and albums, including a long 1989 Tom Carson review of New York that's worth a search for this issue. That and the cover, with the line from Halloween Parade at the bottom ("This Halloween is something, to be sure / Especially to be here without you"), which is suitable for framing.