"... beliefs that would shame even a gorilla ..." The Bible Belt is voting today.

In honor of the GOP primaries taking place tonight in Alabama and Mississippi where up to 81% of the voters are self-described "White Evangelical Christians" and  45-52% of the voters are stupid enough to think that President Obama is a Muslim and only 12-14% believe he's a Christian (a triumph of white-flight Christian schools and home schooling lazily reinforcing treasured prejudices and stereotypes), the quote of this minor election night comes from the mouth of a young Alexander Portnoy, recording his first impressions of a visit to the home of Christian: 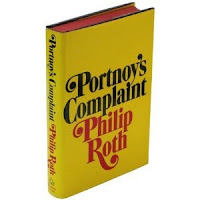 "Tacked above the Girardi sink is a picture of Jesus Christ floating up to Heaven in a pink nightgown. How disgusting can human beings be! The Jews I despise for their narrow-mindedness, their self-righteousness, the incredibly bizarre sense that these cave men who are my parents and relatives have somehow gotten of their superiority -- but when it comes to tawdriness and cheapness, to beliefs that would shame even a gorilla, you simply cannot top the goyim. What kind of base and brainless schmucks are these people to worship somebody who, number one, never existed, and number two, if he did, looking as he does in that picture, was without a doubt The Pansy of Palestine. In a pageboy haircut, with a Palmolive complexion -- and wearing a gown that I realize today must have come from Fredericks of Hollywood. Enough of God and the rest of that garbage! Down with religion and human groveling! Up with socialism and the dignity of man! [...]"
--Philip Roth, Portnoy's Complaint