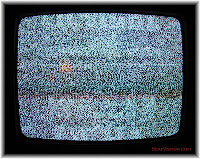 The plug was pulled on my fringe-area television on June 12, 2009, so I've been living without broadcast or cable television for a little over six months now and I see these as the major effects:

1) I find myself less angry, especially on Sunday mornings with no talking heads spouting the right wing's talking point of the week and their "liberal" opponents responding weakly to that orchestrated message.
2) I find myself much less alarmed than my co-workers by the weather (ohmigod, didja hear about the nor'easter on its way?!?) or the latest health scare (ohmigod, SWINE FLU!!) or crime scare or terror alert or whatever the fuck it is that the local newscasters are using as their tease to keep us tuned in and concerned that day so that we can hear the hypochondria-inducing pharmaceutical advertisements between overhyped scare stories.
3) I have no desire to buy anything. OK, if the average boobs who are glued to their tubes did stop watching at any point, the useless-crap bubble that is our economy would definitely collapse. But there's no reason that every single one of us needs to participate in that game.

Does anyone have a good reason why I should pay to watch real-time television? Have I missed anything vital in the past 6 months? (I do watch DVDs of my choosing [from the free public library, not a store or paid online rental service], but don't tell me that I should watch network television online. I don't have a broadband connection either.)
Posted by True Blue Liberal at 12/27/2009 01:43:00 PM