The Kindle Would Be Kindling if Its Components Weren't Toxic, or It's Final: E-"Books" are NOT Books.

The e-book is dead, and killed with the ultimate ironic twist. Click here to read the article about its death on today's electronic facsimile of the New York Times. 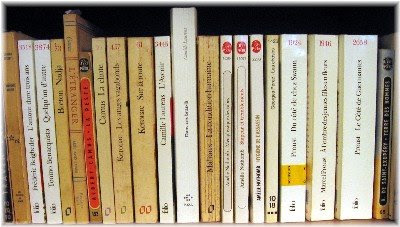 This is an illustration of real books. They contain dried ink on paper.
If George Orwell had been able to imagine the future a little more clearly in 1984, there would have been no paper and ink involved at all in the attempts of Big Brother's regime to control the written word. Ideally B.B. would have provided all his subjects with an ugly little device filled with billions of words that could be changed and controlled from one central computer. George Orwell could not have imagined such a fiendishly simple system to control history and literature, but the folks at Amazon.com have.

According to today's article in the Times, "Digital books bought for the Kindle are sent to it over a wireless network. Amazon can also use that network to synchronize electronic books between devices — and apparently to make them vanish."

As bad as it is that some customers have had their copies of 1984 and Animal Farm deleted from their pasty-white gizmos, at least they know the books are gone. It's the other option, the ability to "synchronize electronic books between devices" which has always been scarier to me. And it's also the mutability that makes an e-"book" something other than a book. The electronic text file may have advantages in searchability and bookmarking over the physical object that it's trying to replicate, but its ability to change its words and shape makes it something which deserves another name. Its ability to have its words and shape changed (or deleted) by someone other than you without your knowledge makes it something dangerous. Calling a mutable electronic text file a "book" is a perfect example of Newspeak, but maybe the best model book for this situation isn't 1984 at all, but Ray Bradbury's Fahrenheit 451. He better realized the real danger of losing the immutable printed word to the omnipresent mutable video screens. And the real power of the immutable printed word over tyrants who would control our futures and pasts. If you have Bradbury's chef d'oeuvre on your Kindle, make sure it doesn't disappear (or self-immolate).
[And, of course, don't ever trust blog entries either.
I could change this tomorrow to make myself
look smarter -- or to please Amazon's rapacious
lawyers -- and you would never know.]
I don't know about you, but I'm taking a trip to the Library this afternoon.
~~~~~~~~~~~~
UPDATE 19 July 2009: Here's an example of Amazon revising a "book" file for Hitchhiker's Guide to the Galaxy on a customer's Kindle to "synchronize electronic books between devices."

This ability to change an e-"book" still strikes me as much more Orwellian than the ability to delete one. Amazon sent this customer an email to advise him about the upcoming change in his electronic text file, but there is nothing to stop a central computer from keeping all electronic "books" fully "correct" and "up-to-date" without any warning (Big Brother's wet dream). All of this points to the need for a new name for these electronic text files. The real books sitting on my shelves (see illustration above) will not be revising themselves anytime soon.

I did make a trip to the Library yesterday afternoon and the dead-tree book I took out was The Great Gatsby; I felt the need to reread it after hearing this show rebroadcast on Studio 360.
Posted by True Blue Liberal at 7/18/2009 11:27:00 AM

Here's an example of Amazon revising a book file on a customer's Kindle. This ability to change a book still strikes me as more Orwellian than the ability to delete one.

Amen, Steve.
Write on.
Read on.
Let's hear it for dried ink on paper.
Norma