The Death of Free TV?

I live in an area where many (including myself) take the train to New York City, but it's a fringy area of television reception. If I adjust my indoor antenna correctly, I can currently get New York channels 2,4,5,7,9,11,13 (and sometimes 21 and some other UHF channels); I don't get any of them well enough to see a moving hockey puck or a golf ball on my cheap 13-inch set, and they're not always in color, but I can see any show that's on broadcast (analog) television by wiggling a rabbit ear.

Last weekend I used my $40 DTV coupon to buy a $49 digital converter box, a Magnavox TB100MG9. When I scan for digital channels, it finds nothing available in this area of Central New Jersey. When I check AntennaWeb, it becomes clear that from my zip code there are no digital stations that are currently available yet without a heavy-duty outdoor antenna. The new converter box confirms this; when I put it on autoscan, it finds no signals.

Because digital television is either on or off -- perfect or nonexistent -- there is no such thing as the fringy, fuzzy signal to which I've become accustomed. I cannot add an outdoor antenna on the roof of my apartment building (nor do I feel I should be asked to), and I have no desire to give any money to one of John McCain's campaign-contributing cable companies. So unless digital signals are strengthened or added before then, this is what I'll be looking at on February 17, 2009 when free analog television dies: 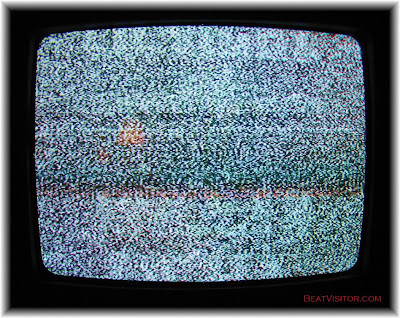 On the downside, I'll miss Bill Moyers and "Nova" and the occasional college football game, and "The Office" and "30 Rock" and "CBS Sunday Morning", and being able to check the weather before I leave the apartment in the morning. I'll miss these shows, but I'm not going to add a monthly bill to my budget to start receiving them again. Once they're gone, I'll just listen to more NPR (until radio is made digital) and play more guitar.

On the plus side, I'll no longer be tempted to flip past the combination of greed, bathos, peer pressure, and statistical stupidity that is Howie Mandel's "Deal or No Deal" just because I'm bored. I'm no longer going to know which automobile ad has resurrected (and therefore ruined) the coolest song from my childhood, and which car looks sleekest while speeding through closed coastal California curves under the guidance of a professional driver. I'm no longer going to believe that the purple pill will make me want to run through fields of wildflowers like it's 1968 again, and that the blue pill will find me an attractive sexual partner to lie down with me in that field. Which makes me wonder what Big Pharma and the (not quite so) Big Three think about losing access to a slice of their potential customers. Is it possible that there's going to be some push back from these powerful economic engines?

This was a bill pushed by all the cable and communications industries and passed 51-50 (with Richard "Dick" Cheney cast in the role of "The Decider") on December 21, 2005. Will it become less popular as other casual TV watchers -- and there are many who live farther from TV transmission antennas than I do -- and advertisers, find out just how many are affected by this change? Or will all the last holdouts (or almost all of them) simply give in and agree to begin paying extortion fees to the cable and satellite companies for something they used to get over the air for free?

Will John McCain's role as a major advocate for this change, and a tool of cable lobbyists, be an issue in the coming election? Or will it only be a big issue next February, when sets actually go black?
Posted by True Blue Liberal at 6/01/2008 03:00:00 PM