The polls are still open in the "Potomac Primaries" of MD, DC, & VA as I write this and the question being asked everywhere is "what does it mean to Clinton if Obama (as expected) sweeps?" It occurs to me that Obama was almost left for dead by the media after losing by a couple of points in New Hampshire. If Clinton had won Washington, Nebraska, Louisiana, and Maine by 2 to 1 last weekend (as Obama did), the media would not be waiting for tonight's results; the punditocracy would be screaming for his withdrawal in the name of party unity. I don't expect anyone to be making that call of the losing candidate tonight. She still has her Giulianiesque reliance on the primaries of March 4th.
But that's not the point of my writing. 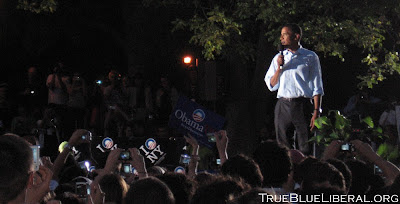 I wanted to write about Hope and Fear. I'm reading the Herbert Lottman biography of Albert Camus at the moment, and the mentions there of "Neither Victims Nor Executioners" ("Ni Victimes ni Bourreaux") were very intriguing to me, and the discussions seemed very contemporary in this age of Guantanamo's military tribunals. I found an English version of Camus' essay online this morning and was shocked by the first paragraph:

The seventeenth century was the century of mathematics, the eighteenth that of the physical sciences, and the nineteenth that of biology. Our twentieth century is the century of fear. I will be told that fear is not a science. But science must be somewhat involved since its latest theoretical advances have brought it to the point of negating itself while its perfected technology threatens the globe itself with destruction. Moreover, although fear itself cannot be considered a science, it is certainly a technique. (tr. Dwight Macdonald)

George W. Bush was the last President elected in Camus' century of fear (which technically ended on 1/1/01). Could the first new president elected in the 21st century actually triumph using something other than that most tried and true marketing tool??

The biggest fear-monger in this primary season, Rudy "Noun,Verb,9/11" Giuliani was quickly rejected for more than just his bad Florida strategy, though he had been the media-anointed front runner only six months ago. Really, they reasoned, how could such pure fearmongering without experience fail to excite the Republican, if not the American, electorate?

A quick Google search for the phrase "Hope and Fear" led me to this very interesting article by Andrew Sullivan in the December 30, 2007 issue of The Sunday Times (London): "America has a clear-cut choice: the candidates of hope or fear". It turns out that he identified only two candidates of hope in his review of the field (before the winnowing started in Iowa on January 3rd):

After following this race for an almost interminable preamble, all I can say is that I can’t imagine a more constructive race than one between Obama and McCain. The odds are still against it. But it is more imaginable now than at any time in the past year.

I may not totally agree with Andrew Sullivan's idea of John McCain as the candidate of hope (though his lack of anti-immigrant fearmongering and his principled attack on torture do put him head and shoulders above his fellow Republicans), but how hopeful is it that these two have now beaten the long odds (even if the candidate of fear among the Democrats will hold out at least until her campaign reaches the Alamo on March 4th)?
Posted by True Blue Liberal at 2/12/2008 05:04:00 PM