The Democratic Cult of No Personality 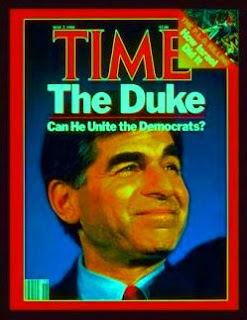 20 years ago, the man to your right, the ultimate policy wonk in a party of wonks, the man who proudly read books about Swedish land use on vacation and never read novels, represented the Democrats in their unsuccessful run against George Bush I. He was not an anomaly in the years since the Democrats' Camelot came crashing down.

Mondale, Carter, Gore, Kerry, Dukakis, Bradley, Clinton I (circa 1988 when he put people to sleep with his overlong convention intro of The Duke), and Clinton II, have all proved themselves capable of losing big blocs of votes with every extra paragraph of exposition that leaves their mouths.

"People say to me all the time, 'You're so specific. You talk about all these things you want to do. Why don't you just come and, you know, really just give us one of those great rhetorical flourishes and then, you know, get everybody all whooped up?' "

Why do some in the Democratic Party (a minority at this point in the primary process, but still a powerful minority) fear the one person in the race who does have a personality and a natural ability to get people "all whooped up" in addition to having clear specific positions on every major issue that you can find articulated in great detail here? There is (to paraphrase Walter Mondale's infamous meaningless paraphrase of a Wendy's commercial) beef here! Is their fear of Barack Obama a simple fear of change? A fear of hope? A fear of enthusiasm? A sneaking suspicion that "optimism" is a code word that was somehow copyrighted by the Reagan Republicans?

As long as this cult of no personality -- this cult of wonkishness as proof of seriousness -- survives among the Democrats, they will continue to lose national elections, even to short-armed septugenarians pushing the failed foreign policies of 1950's America.
Posted by True Blue Liberal at 2/14/2008 12:37:00 PM