Until further notice (or indictment), the phrase "Senior White House Advisor" should be globally replaced with the words "Karl Rove" 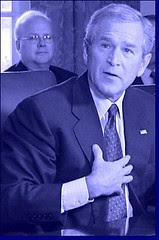 from The Washington Post, "Trial Could Pit Libby's Interests Against Bush's":

"A senior White House adviser, speaking on the condition of anonymity to discuss the sensitive topic, said the Bush team believes it dodged a bullet when Fitzgerald charged only Libby on Friday and then pointedly said in his news conference that the indictment should not be read as a condemnation of the war or its run-up."

Just once I'd love to see a sentence start with these words in the Post or the Times: "Karl Rove, speaking on the assumption that we would respect our 'promise' to protect his anonymity, ..." Is there ever anything that any anonymous senior advisors in any Administration (Republican or Democratic) reveals anonymously to their embedded media partners that isn't either a) a self-serving lie, or b) self-serving spin?
Just asking.
True Blue Liberal
crossposted from http://whiggate.org/
Posted by True Blue Liberal at 11/01/2005 09:15:00 AM

Fitzgerald's tactics in other cases suggest taht he'll try to get Libby to turn state's evidence, but it's not clear if (or how) that could hurt the administration.